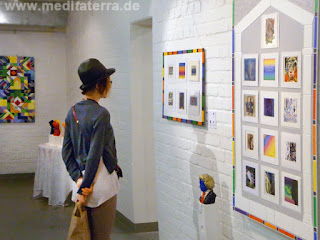 As we reported in our last blog post, our first art installation took place in August 2015 in Cologne, where we were able to implement our exhibition concept for the first time. We are extremely happy that we were able to realize the exhibition in such a short time. Mainly because of the diversity and the high qualitiy of the exhibited works of art, but also because the concept made for a real event, it was an exciting and entertaining exhibition.

Presentation of our concept


Opening of the Prelude exhibition

We gave the exhibition the title ‘Prelude’ because it was the forerunner to our main exhibition in February / March 2016 in Cologne, and the traveling exhibitions in Lahntal. Many of the participants have already confirmed their participation at the main exhibition, where we are now expecting at least twice as many artists from a range of different countries, with which we are very satisfied. We thank all participants for the commitment!

The concept for the art installation was created and implemented jointly by Kurt Ries and Gabriele Walter. As written in our concept, each color had a door or windows hinting at art-historical architectural styles from different regions and continents. Visitors looked into a building, and had the impression of entering a living room where the walls were decorated with pictures. At the same time, they also looked beyond the building into an intercultural world.

The event character of the exhibition was emphasized by the meditation portfolios, allowing proper contemplation of the pictures and enabling every visitor to experience intense relaxation with the colors and art. Visitors could wrap themselves in colored velvet towels. Each color was affirmed through succinct description of its characteristics, as well as tones and sounds that accentuated and deepened the color experience.

The exhibition consisted of three color spaces. There was both a vividly colored energy space and a quieter room in shades of black and white. In the third room there were more neutral color zones of green, blue, purple and yellow. According to the premises and the number of images, the arrangement of the color zones will change with each subsequent exhibition.

As artistic exhibition designers we exhibited as the German contingent in the exhibition. Kurt Ries exhibited two works that fitted perfectly with the theme of the art installation and the diversity of the participating artists. He also created the monotonic color banners. Gabriele Walter contributed some refined haiku poetry. The haiku poems were otherwise scattered in the color panels around the exhibition space, pulses of color interacting with their poetic sounds.

The quality of the Prelude event was recognized, with successful word-of-mouth advertising. Some visitors came back for a second time, bringing a friend. In particular we are pleased that some pictures were sold, we are happy to give the contact with the artists.

The relaxation corner was also well received, designed with sculptures and colored light and a lounger for relaxation. There Gabriele Walter gave a lyrical reading of works relating to the sea, including both her own haiku poems and works by Heinrich Heine and Johann Wolfgang von Goethe, among others. Five meditative films helped frame the exhibition, each relating to the sea, set to relaxing music.

We also experimented with video, music and projected light. We want to continue to contribute our own creative ideas in the main exhibition. Also the intensive accompanying program at the Cultural Center, Cologne-Muelheim, and the regular intercultural market day on Friday (in front of the Cultural Center) proved to provide successful publicity.


Of course we were also very pleased about the artist visits from our neighbors! The haiku poems of Gabriele Walter received particular praise as a rich poetic addition to the visual artworks - particularly the Moon Haikus in the black-and-white space.

It is not the first time that Gabriele Walter’s poems have been successfully presented to the public. Gabriele writes her poems on meditative walks in nature, which is reflected in the lyrical depth and vividness of these small works of art.


Like the sculptures, the poems will accompany our artbook (catalog) of the event 2015/2016. Comparable to the small-format images, they are meditative essences of nature, landscape and Muse – relaxing distillates for body, mind and soul.

As part of the Prelude exhibition in Cologne we also started to build up our online show, which was announced also in our German-language Meditaterra Google + network and in the network "Xing". We hope that we can build the popularity of the online show in the lead-up to the main exhibition.


We are pleased to announce that we were able to set the date of the second traveling exhibition in Diez over the Easter period. And the main exhibition in 2016 at the Cultural Center of Cologne-Mülheim has already been advertised. The long period of publication will certainly contribute to success!


As you know, the main show will also include awards. Our task for the next few months will be to develop the details for the awards and the rules for the online show, as well as building cooperation with partners and german artists. We will keep you informed.

Link to: Opening of the Prelude exhibition

Our deadline has been extended until December 31, 2015. We look forward to your participation in 2016 and also to your recommendations, please take a look at our new page "Interested?".

We are open to constructive opinions and comments!