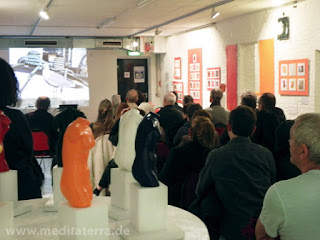 This year’s Enter into Art exhibition period opened on February 14, 2016, featuring 205 images by 205 artists from 50 countries on five continents. All images submitted by artists were also presented in folders in our “Atelier Corner” (usually including two further images per artist). The main exhibition can be visited until March 13 at the Cultural Center in Cologne-Mülheim. A total of 20 prizes have been awarded, including 12 jury awards and 8 editorial awards.

“The aim of art is simply to create a mood.” Oscar Wilde


Intercultural art installation and presentation to promote smaller-scale works, including meditative aspects, with the guiding theme “Fascination of worldwide art and color”:

or see the following links:


Thank you for your great work and the friendly cooperation!

The exhibitions are an artistic arrangement mainly consisting of small-format pictures by artists from around the world, which are arranged in color contexts. The pictures are accompanied by artistically designed sculptures and pictures by Kurt Ries and the lyrical poetry and relaxing music of Gabriele Walter, as well as art objects and multimedia arrangements.

Based on our “Prelude” exhibition of August 2015, the art installations in 2016 have been extended to include the fields of poetry, music and sound to accompany the meditative art and color. Moreover, as readers will already know, there is our cultural program with film and music.

We are grateful to all the artists for their participation in this international exhibition. We are especially pleased about the high quality of the pictures, and thank all participants for their commitment. Further information and photos of the exhibition period will be published later.

The opening was a wonderful evening with many exhibition visitors from Germany and from abroad. Thank you again for artist visits from our neighbors! Let's start with the farthest ways: Brigitte Caillaud (Paris), Katharina Proch (Switzerland), Jan Goede (France), Luc van Loock (Belgium), Christel Roemermann and Marian Vergouwen (Netherlands).

We have selected a jury consisting of 13 participants from 13 countries, which has identified the winners. In an anonymous vote, the jury selected 12 winners. Our team has also awarded a Special Award and 7 Honorable Mentions, which is consistent with our PR concept.

Germany is represented by the hosts Gabriele Walter (poet and artist) and Kurt Ries (artist), who have contributed the artistic conception and design of the installation (including pictures, poems, sculptures, relaxing music, multimedia, and art objects).


We have already written about the prizes themselves. The basic prize is the free publication within a year of a meditative blog post about the winning image. The timing of publication will depend on editorial decisions.


We would like also warmly thank to the jury members for their excellent work. Thanks go also to the award winners for their high-quality artworks – congratulations!

The jury members were selected by our team, taking into account the spread of countries of origin of participants as well as professional and conceptual aspects. The jury result was determined from a shortlist of 68 artworks. These works had a wide variety of colors, styles and techniques.

About the Editorial Awards

“The color does something” Johann Wolfgang von Goethe

Inspired by other award ceremonies in the field of art and as editors, we have decided to increase the number of prizes. This is also consistent with our PR-concept, which will allow the artists the greatest possible publicity. And of course it makes sense also because of the many high-quality images and our work as art bloggers. The number of editorial prizes may vary in the future.

In the next two weeks we will publish the first winner-post in our German online show. In addition we will built the basic color scheme of the online show, in which we will integrate at first all the pictures of the exhibition 2016. There the images are posted for a limited time. The art book catalog is prepared after the last exhibition. Probably it will be sent in the summer 2016 along with the images.

P.S.: We are currently preparing a list with the titles of all three submitted images that will be published later.