Opening in Bad Breisig: Enter into Art-Prelude event (Homage to Turner on the Rhine)

This year’s first Prelude exhibition opened on August 20, 2017, on the 200th anniversary of William Turner’s first journey to the Rhine! The “Enter into Art” International Installations 2017-18 bonus event takes place from August 19 until August 30, 2017, in the cultural center "Kulturbahnhof", in Bad Breisig on the Rhine. This excellent exhibition features small-format images by 95 artists from 37 countries spanning five continents, and is connected to the cultural program “Homage to William Turner and the Rhine Romance”.

Thank you for your great work!

With film screening, poems and lecture on the topic


At this smaller introductory exhibition, we offer art fans further artistic delights. Please read more about the background for the selection of the Turnertheme in our previous blog post. There you will find also the opening times.

Besides the high-quality variety of small-format pictures from all over the world, in this exhibition, we have integrated 20 exquisite Rhine Romanticism poems, which can be read in beautiful picture frames, recalling the time of William Turner. In addition, three film screenings with relaxing music will take place. The films feature Turner motifs and the most important aspects of Rhine Romanticism, reflecting the colors and light used in William Turner's paintings:

In addition to a reading on “William Turner and the Rhine Romance”, with poems and lecture on the topic, the films will be shown at the opening of the exhibition on August 20th. The films will also run in the background for the visitors of the exhibition over the following days, so that they can read the poems and look at small-format pictures from all over the world with a musical background and in the light of the Romantic Rhine of Turner’s paintings.

Thus the artistic design of the exhibition, with small-format pictures from all over the world, will be included in the multimedia performance of the cultural program. The films were created in the relaxing “meditaterra” film style, in which color and light as well as poetry and music play a very special role. In addition, Kurt Ries has created impressive art using sculptures, Rhine sand and mussels, which flow with Rhine-themed Haiku poetry by Gabriele Walter.


Our Prelude exhibitions also include various online events, mainly presented by our German blog, which will function as a lasting and far-reaching dissemination of content. Several
appropriately illustrated blogs will be published on the Turner theme and linked to the 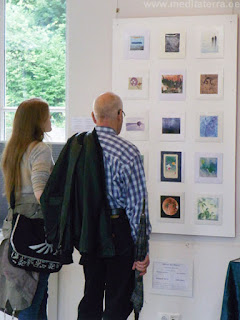 participant list. The Rhine videos will also be published later on. The corresponding links will be published on our archive website under “Related Links”. (German-language blog posts can be translated using Google Translate.)

The subjects of participating artists’ works are not required to relate to Turner or any other theme – all artists may choose their subjects freely! The artistic design and content of the exhibition theme is executed by us and accompanies the events as a PR measure. The Prelude themes of our exhibitions are also included in our annual art book (catalog).


Due to the judging process, pictures are only released at the end of the exhibition period, but photos from the Prelude events are published promptly. In the exhibition, we can also present our new art book (2017), which we could pick up in time  from the printing company.