Opening of the Prelude exhibition in Bad Breisig 2018-19 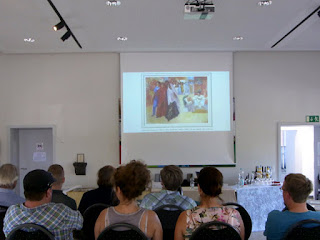 The two Prelude exhibitions of the 5th ‘Enter into Art’ International Installations 2018-19, which promote small-format pictures from all over the world, will be accompanied this year by the cultural program ‘Touring the World through Art’, in which the artists themselves are involved. There will be a multimedia presentation with large-format pictures by international artists, accompanied by flows of relaxing music. The traveling exhibitions ‘Fascination of Worldwide Art and Color’ will take place on three rivers (the Rhine, Moselle and Lahn) during the forthcoming exhibition period.

Prelude exhibition in Bad Breisig: Touring the World through Art

Please see more photos and the lists of participants on our archiv website:

This art event takes place from August 18th to 29th 2018 in the cultural center ‘Kulturbahnhof’ in Bad Breisig with 103 artists from 38 countries. The video projection ‘Touring the World through Art’ has 28 larger images and is integrated into the exhibition. Two further images of each artist are available in folders. In addition, the large images are available in reduced-size reproductions (information photos), to take away for free. In the video, artists from all over the world reflect upon the subject of travel. The exhibition allows the audience to view a wide spectrum of art from more than 40 countries and five continents.

The annual art installation ‘Fascination of Worldwide Art and Color’ shows small-format images from all over the world, including meditative aspects. The images are arranged in ‘color zones’ for attentive viewing and relaxation, allowing the idea of intercultural exchange to flow in. In doing so, very different artistic techniques and styles are presented and combined with smaller sculptures and art objects as well as poetry and sound.

Lecture on traveling, poetry and art

In a lecture about traveling, the travel author Gabriele Walter will accompany the film screening in both a musical and a lyrical way. In addition to the own haiku lyrics and relaxation music, the lecture incorporates exquisite poems by famous writers, in particular the German poet Rainer Maria Rilke, who is examplary for the correlation between art and poetry. Consequently, the film and the lecture inspires visitors to meditate on art also in this way.

With his so-called ‘image poems’, the well-traveled Rilke was a German Apollinaire and fits perfectly into our concept of exhibitions. Our visitors always meet this concept with very great interest. Therefore in addition and renewed, Apollinaire’s image poems are shown on the tables (our homage to Apollinaire see the link!), while viewers also can read there the most beautiful travel haiku by Walter. All poems of the event are presented in small frames, making them look like art objects. Rilke’s poems, meanwhile, will be read in the lecture.

When reading and listening to the poems, inner state of mind and external reality merge into each other. On the basis of image poems, art lovers are led also to a deeper understanding of the international images in the exhibition. In addition, the lecture will be accompanied with thoughts about traveling in a philosophical way.

Scientific research shows that Rilke was inspired to write numerous poems by looking at the works of Rodin, Cezanne and the Impressionists. As Rodin’s secretary, he lived in Paris for many years. When Rilke encountered a creative crisis, he turned increasingly to the visual arts. Through the detour of this other medium, he came to new impulses for his own work.

Rilke was a poor poet, who could not afford his own family. However, he had many patrons who funded his travels in Europe and North Africa. Part of this exhibition is Rilke’s wonderful poem ‘The Poet’, which draws attention to the problem of give and take by art. It is always important for us to draw attention to the ideal value of art which, when it comes to art’s wide range, unfortunately is too often underestimated and not appreciated enough.

Interplay between the arts

In this way, this year’s exhibitions follow on from the cultural programs of previous years: in the exhibition ‘Homage to William Turner and the Rhine Romanticism’, we had already devoted ourselves to the topics of art, poetry and traveling, as Turner was a widely traveled artist. Turner not only visited the Rhine, but also its tributaries such as the Moselle. Since then, we have continued a series of articles on the homage theme in our German blog journal, including the publication of pictures by participating artists.

The interrelation between art, poetry and music – as well as the subject of travel – also play a role in our series of articles on Johann Wolfgang Goethe and Ludwig van Beethoven. Goethe, for example, wandered along the River Lahn and his footsteps can be retraced in the Goethe vineyard. His Italian Journey remains a trigger for the ‘Grand Tour’ or travel to the south.